In 2006 the boat was moved from Cemaes to be stored under cover at Classic Sailboats, Bethel in order to control the precarious condition of the hull timbers and stabilising its condition thus reducing the risk of further deterioration. 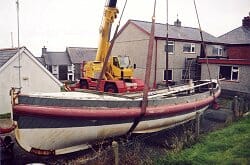 At the same time, pledges of support came from many corners of Anglesey and beyond. Contributions in kind resulted in various materials, paints and equipment being received either free or heavily discounted. Meanwhile a Heritage Lottery Grant bid for just over £41,600 was successful. Classic Sailboats was then able to begin the task of restoring the old vessel – although more funds were needed before the work could be completed.
Over a period of two years, almost all the timberwork except the hull planking was removed and replaced. The hull itself needed some remedial work and was subsequently coated in epoxy cloth. The keel was found to be broken when removed and this was repaired before being replaced. 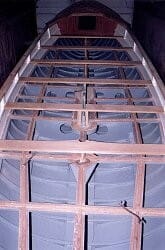 The twelve oars, six painted blue and six painted white were made by Scott Metcalfe in his Port Penrhyn workshop.
The sails were made up by JKA Sailmakers of Pwllheli and consisted of a main and mizzen lug and jib. 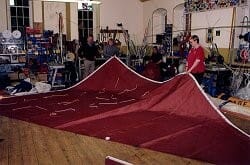 It was the dedication of the members of the original Cwch Ashley Boat Cemaes Ltd., under the Chairmanship of Colin Salt, with assistance from the Treasurer Peter Wain, who oversaw this restoration with advice from all the other Officers (Dafydd Williams, Owain Roberts, Brian Thompson, Steven Williams, Mike Thompson, Gwyn Jenkins, Mike Fox and Peter Williams) before Charles Henry Ashley was finally re-launched in 2009.