When I wrote my last news bulletin in the Spring, I said that I was becoming more optimistic. However, events have taken rather longer than we anticipated and despite the vaccination programme, the coronavirus has continued to throw a long shadow over us and we still need to take care regarding meetings and social occasions.

Nevertheless, members have been able to get out and about more. Music playing is back on the agenda once more in the Vigour on Thursdays, under the watchful eye of Carys, who has continued to support us in every way possible, despite her current illness.  Cemaes village has seen an unprecedented number of visitors this year, due to the staycation and this has resulted in potentially more publicity for the CHA via the notice board on the pier.

We are hoping to get permission to put up our own waterproof notice boards on the Pier and also on the Car Park Café next to our information boards, so that news updates and sailing times can be further publicised. The donation box will also be replaced as the marine environment has reduced a succession of previous boxes to rust.

The Harbour Committee requested that because we were not returning to the water this year, our regular mooring be removed in order to provide moorings for other craft. We were assured that this move was only temporary and that we would be able to return next season next to the harbour wall where we belong.

We offer our thanks to Eirlys Mason and her team of volunteers for their hard work in running a Tombola stall on Bank Holiday Sunday outside the Vigour, which raised nearly £300. It was a really successful event and many visitors to the village said that they will be back and we hope that they too may become joining members of the club.

Our monthly meetings have resumed once more, initially outside in our back garden and then in the Vigour. We were pleased that our AGM was eventually held – and that we were able to elect the officers needed to run the Boat Club. These meetings have, understandably, been attended by fewer members and there has been less to discuss, but progress has continued to be made, with vital decisions being taken. One of these was our relationship with Cemaes Community Interest Company (Cemaes CIC).

As those who read our Facebook page and who receive our updates will know, it was hoped that the CHA would find a permanent home and display area. This was as part of a large project on the site of Capel Bethlehem that also included a restaurant, retail outlets and a holiday let. Sadly, more recent groundwork surveys have revealed that an additional retaining wall is needed to ensure that the chapel buildings are not in any danger of subsidence. This means that there is an attendant increase in costs for the project, but for the Boat Club the subsequent restrictions on available space have a huge impact. There would not be enough space to display the boat effectively to the public and no room around the boat to carry out any maintenance work. Therefore, at the last monthly meeting in August, it was regretfully decided that Cemaes CIC and Cemaes Boat Club would have to reach a parting of the ways in order for both projects to progress. Cemaes CIC could now broaden its ambitions to incorporate alternative revenue-raising businesses and the CHA would seek a home elsewhere. We have parted on the best of terms, wishing each other every success for the future and pledging to support each other (indeed a number of committee members of the Boat Club are on the board of the CIC).  However, it was becoming obvious that the present uncertain political and economic climate has made making financial commitments for ambitious projects like this more difficult.

There has nevertheless been a lot of progress over the summer. The Charles Henry Ashley is still in her winter quarters at Peibron Farm, but a great deal of work has been done in terms of general repair and maintenance, for which we thank, once again, Norman Mason and his team of helpers. In particular, Simon Drakley, Mike Thompson, Steve Bray, Alun Parry Huws, Paul Beales and Richard Walton deserve a mention. Undoubtedly, there would have been many more of the usual volunteers but that Norman wanted to keep the numbers below half a dozen in order to prevent transmission of Covid……..and I apologise if I’ve missed any helpers off my list! 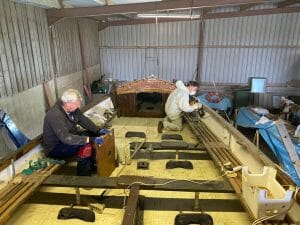 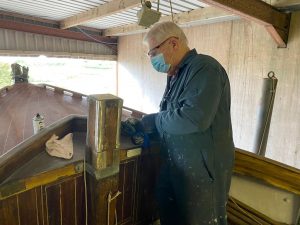 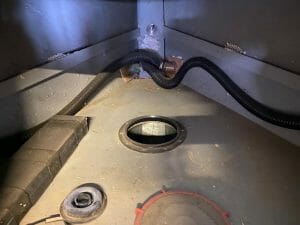 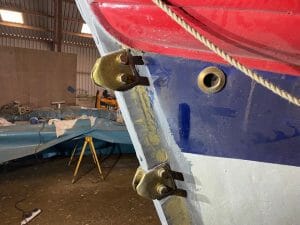 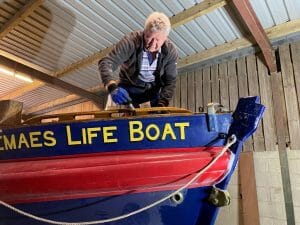 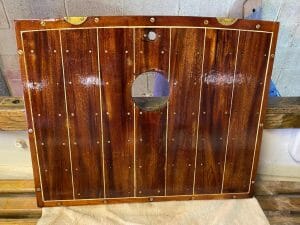 The rot in the stern of the boat has been rectified with the introduction of Brazilian mahogany and a similar problem in the bows, only recently diagnosed, has also been treated. Alun Parry Huws demonstrated that keeping slim has its advantages when working in a tight space! The boat has been sanded down and re-varnished, and all repairs are on target for a launch next year.

The fenders, which seemed in need of replacement, have come up shining after treatment with Jif (other cleaning products are available) and these, combined with the replacement of part of the rubbing strakes and some excellent brass work upgrades courtesy of Gerallt Jones, have resulted in the boat looking in fine fettle. The plan is to take the boat out of the shed soon, in order to put the rudder in place. This is a difficult job, requiring the use of a crane and we thank Dafydd Owen at the farm for his continued interest and assistance. His support for Charles Henry Ashley is greatly appreciated.

Our acquisition of the building at Wylfa, The Firs, was thought to have been halted, due to legal technicalities, but just recently the team at Horizon have changed their stipulations and it seems that the facilities may be available to us once more at no cost. We’ll have to see what transpires, so watch this space.

Financially, the club is holding its own, despite the falling membership. This latter is understandable due to the lack of sailing availability. However, we would encourage you to renew membership if you have not already done so, in order to guarantee yourselves a place on next year’s sailing days and also because we would hope that you would want to support us anyway. Contact our membership secretary, Sian Jones on sian666@live.co.uk for any further information.

Even though Social Events have had to take something of a back seat these last eighteen months or so, one further bright star has appeared on the horizon. Yes, it’s the return of the Annual CHA Christmas Dinner! This year it is on December 11that the Gadlys Hotel. We are aware that most of the rooms have already been booked, so to avoid disappointment, contact the hotel directly for the remaining few, or book alternative accommodation at the Harbour Hotel.

We look forward to seeing you all again soon.