We’re all prepared to set out on our slightly altered Adventure which will take Charles Henry Ashley from Cemaes to Moelfre and back. 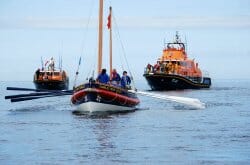 As some of you will already know, the Club’s great friend Alwyn and his boat Kayotic are unable to support CHA with the proposed sail to Conwy this year due to engine problems.
We have worked hard trying to find a suitable alternative escort boat with capacity to tow CHA if required but unfortunately this has not proved possible.
Reluctantly, we have concluded that it would be irresponsible to proceed without support.
So, the alternative is:
• Sail to Amlwch on Friday 19th July as originally planned, mustering in Cemaes Harbour at 1000.
• Meet at 0845 on Saturday 20th July at Amlwch leaving at 0930 to sail for Moelfre (ETA 1130-1200), leaving Moelfre around 1330 to return to Amlwch for around 1530-1600.
• Return from Amlwch to Cemaes Sunday 21st July, meeting at Amlwch 1300 and leaving as soon there is slack water.

There are a few spaces remaining for all sailing days….why not come and join us!! Get in touch now to book a last minute place. (madowns23@hotmail.com)

Please note that the weather might be a bit wet and windy!!